Permutation
Another DLP challenge, third one this week. Relatively simple, so no writeup.

Catino
Probably could have figured out the LLL solution if I used my brain more, luckily we found a sage function to do it for us.

Shero
I’m not a web guy, but this challenge was fun. This is not to say I didn’t lose a few years of my lifespan doing it, but it was fun.

23 Solves
Teaching computers is like teaching children, you gotta start simple. Today I taught it to recognize the flag!

We’re given a PyTorch (based) model:

And we’re told that upon inputting the flag, it outputs 1.

While not directly stated, we can derive the length of the flag by looking at the shape of the first weight:

This CTF was run right after SEETF, and so my mind was still primed to one challenge, Neutrality, where I had solved it by “training” the input to an objective. I hence attempted to do the same here.

First, I swapped out the step_activation definition for a tanh, which has roughly the same properties, but is continuous, and more importantly, has a useful gradient:

And from there, attempted to train an input to maximise the output (corresponding to the flag). Sadly, this didn’t work.

EDIT 6/12/2022: After looking at it again, I did indeed backprop it successfully! I just interpreted the bits incorrectly (Used the same method as Neutrality, which is wrong). Not sure how the blood didn’t get sniped, but I’m not complaining.

Looking at the weights and biases

Let’s actually do the challenge now.

Looking at the linear layer’s weights and biases:

This time, the weights are $0$ or $1$ only. A weight of $0$ indicates that the neurons are effectively disconnected.

$0$s correspond to input neurons with no connections to any active hidden neurons. Hence, we have our input:

Now, we simply need to un-tensorize it into the flag:

We can guess the next PRNG output, and each time the server will tell us if we were correct. We need to get 100 correct digits in a row, with a cap at 5000 tries.

Despite this, we found it to be quite finnicky. The first RealField has to be of a similar precision to the decimal from the PRNG, else it would fail. When it fails, often the coefficient of $x^4$ isn’t $1$, hence the assertation.

We have a php script, which runs cat <input> given that it doesn’t match the regex.

We had a few failed first attempts trying to bypass the regex. The first idea is based on the fact that preg_match sometimes only matches the first line of input. Running a command like

Could hence fail to match the second line, bypassing the regex. Unfortunately, we don’t have a ^ ... $ regex here, we had a [] group, which has no such problem.

There was also the possibility that passing a non-string datatype to preg_match would, instead of raising an error, simply emit a warning and return false. Then the concatenation with the string would allow the true payload to be run. Sadly, preg_match does raise an error. It only emits a warning if the pattern is invalid.

Taking a look at the regex in Regexr, 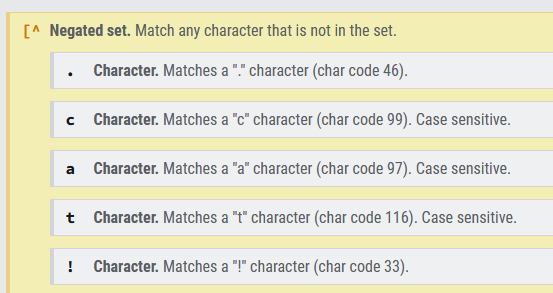 The regex works by attempting to find a character not found in the given set. If found, it returns 1, and hence the die branch is run. Hence, if our string only contains the characters

Then it’s happy to run it.

Apart from cat, the remaining characters we have to work with are a subset of the glob characters. For instance, in a directory:

We can use this to our advantage. There are a few more glob syntaxes that we’ll use later on, but I’ll introduce them as they come along.

Additionally, we have $() at our disposal, allowing us to use the output of one command as part of another. For example:

Would evaluate date, and use its result in echo:

Running commands on the server

One thing to note is that we can run any command (that matches the regex) we want by doing:

which is run as

While cat a fails (due to there being no file a), the output is piped into cmd, which thus runs.

The first thing we might want to do is look around. For this, we’d need to somehow run ls or dir. These binaries should be in /bin/.

On your local system, doing

Will show the files matching the pattern ???. (? means any character) There are many, so I won’t show it here. Running the glob /bin/??? hence won’t cut it. We need to filter it down more. Let’s start being more specific with our matching using character sets, [].

If you recall from the regex, [] in essence, means “match a character in this set”. It works the same with glob. The main patterns we’ll be using are:

With a little trail and error, we see that

Now, if we want, we can dir any directory! For instance, the root directory:

Now, interestingly, there seem to be two important files in the root directory: flag.txt, and readflag.

Let’s try to cat flat.txt. As before, we need to match it with a glob. With the help of /bin/dir, we can run

Which only outputs/flag.txt, indicating that our glob only matches flag.txt.cating /??a?.t?t, however, seems to output nothing. Perhaps we don’t have the permissions.

Which is an executable! Let’s try to run it:

With the help of your local rev-er, they can tell you that this executable has the permissions to view flag.txt, and prints it. However, it only does so if you input the correct password, sRPd45w_0. You can test this by saving the ELF locally, and running the command

Which will print the contents of flag.txt.

Supposing we could find an expression that evaluates to each of the required characters, then getting the flag would be easy. All we need to do is to run

One of the first ideas we had was to cat out a file’s contents, then extract out the needed characters. We also had another idea that uses a Base64 encoding of characters, but again it would require extraction of needed characters. Let’s first look at that.

We quickly figured out that there was a command, cut, that could help us with extracting chars.

Critically, the option -c uses allowed characters. While -b works similarly, b isn’t allowed, and since this is the method in which we’re using to extract arbitrary characters, we can’t use it.

But wait, how do we get 5? This was yet another road block, but we figured that if we could somehow get the length of an arbitrary string, we’d be set. Sadly, there’s no command length.

However, we did find a method here:

Which again, luckily uses -c. Note that it’s one more than the number of cs, because there’s a hidden newline. We never had to get a 0 character, so this was fine with us. Had we needed to, though, we could have extracted the second character from a number like 100.

With that, we can continue to the final steps.

would sometimes output useful characters, such as in this case, R. Using a direct search of all 3 character sequences containing .cat!?$, we found that RPd450 were possible through this method, short of sw_. For reference, the following expression evaluates to R:

Which then is represented as:

We still were missing sw_. We decided to start looking for files that could possibly contain them, which we could then do.

If you’re eagle eyed, you might have spotted the w in the second line. Why didn’t we use it? Well, cut has a caveat. It’s meant for processing many lines of data, and hence, -c actually specifies which character to extract on each line. For instance,

Which means that the multi-line outputs we found couldn’t be used directly. We worked around this issue by using tail with the -c (again) option, which specifies the number of characters to extract from the back. This allowed us to index the last line easily, but nothing else. /etc/netconfig contains s and _ on the final line, similar to /etc/mtab and c. Putting it all together, this expression evaluates to _:

Which is represented as:

And with that, we have what we needed. This is the full breakdown of the command:

The expanded,1738 long f is pasted below.

Giving it to the server, we get our flag.